Me every morning when I first open my phone (i.imgur.com)
posted 183 days ago by SaginawSausage 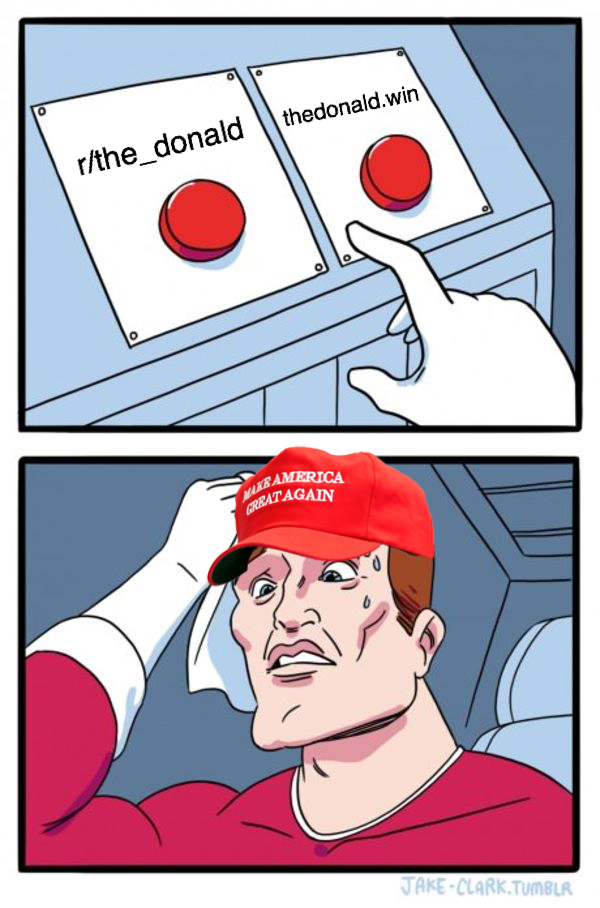 I always question the loyalty of dual citizens. The are usually spies and leaker, types. Milking both systems for their own benefit. Oh you have Chinese AND Canadian passports? Hmmmm. How are those Vancouver real estate investments working out for you? Rents are astronomical from what I hear. You don't reside in any of them? So you are really harming Canada, rather than helping its citizens.

What other country is Trump a citizen of?

He means dual citizenship of both r/the_donald and thedonald.win.

I think he is referring to Trump support in general. Like having a Chick-Fil-A in North Korea. They aren't allowed to operate freely like they do in the USA, but the store exists, so that is a GOOD thing in his mind, even though it doesn't have any chicken sandwiches or Christians working there. It is also why I will never again join in a discussion on any reddit sub or click on an ad from their sponsors. No free speech? You don't get my attention and clicks. Chick-Fil-A in NK? Utterly pointless and a bit embarrassing for their brand and ours. Reddit=North Korea.

That argument feels hypocritical to me, but I will defend your right to speak it here.

Exactly. That's precisely why the real estate market has deteriorated here in Canada. Because of this unchecked vulture capitalist practices that are supposed to be curbed by anti-trust laws. People are buying up property from overseas with little to no restrictions and actual Canadian citizens are suffering as a result.

Thanks for your points, anti-trust needs to be brought back to the discussion, I wholeheartedly agree. B.C. looks like it might secede from Canada proper, if they keep going the way they are. It is addicted to Asian capital investment and that has implications for their political future. Hong Kong 2.0

Such is what happens to a country where its politicians sacrifice integrity for wealth and where its citizens sacrifice principle for tribe. Not that I didn't think it wouldn't ever happen. I'm just at awe at how quickly it did. It's amazing what a little social engineering and gratification we get from upvotes can do in the echo chambers that we call social media. That's by no means trying to downplay the role society is responsible for for raising a generation surrounded by praise which resulted in the narcissism and complacency rife in today's youth, though. That is an entirely different monster in and of itself.

All moderation questions and concerns should be submitted privately.